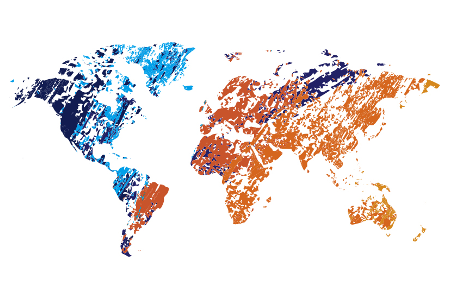 Countries of South East Europe and the Caucasus (SEEC) are highly vulnerable to natural hazards. 90 percent of South East Europe is located within trans-boundary river basins, which makes the region highly prone to floods. Due to climate change, the frequency and severity of natural disasters, particularly those of hydro-meteorological origin, are rising in all SEEC countries by causing severe human, physical and economic losses to both governments and populations.
Governments in the region have very limited financial capacity to assist their populations in regaining assets and productive capacity destroyed by natural disasters. An illustrative example of this is the 1994 Macedonia floods, which caused damage worth 77 times the amount allocated by the government. For this reason, one of the basic tenets of disaster risk mitigation is the transfer of financial risk of natural disasters from the public to the private sector.
Catastrophe risk insurance is a way of transferring the financial and fiscal risk of disasters from government to the private sector. Not only does it protect the national economy, homeowners, farmers and SMEs, but it enables more effective targeting of government assistance following a disaster.

Additionally, considering that a large portion of the bottom 40 percent of population in SEE depend on agriculture for their livelihoods, a better insurance coverage of agricultural crop yields provided at the municipal level will enable local governments to implement appropriate post-disaster response and mitigation programs for these vulnerable segments of population.

One of the motivating factors for the establishment of Europa Re was the necessity to develop (re)insurance mechanisms to increase the resilience of the countries of Southeast Europe (SEE) to climate change. The formation of Europa Re is aligned with and promotes the recent international drive to utilize disaster risk financing and hedging instruments as part of climate change adaptation. Europa Re supports affordable catastrophe insurance products for consumers and market-based risk transfer mechanisms for governments which are central to this approach. The company was designed to address the problem of low penetration of catastrophe insurance in SEE by increasing the outreach of Europa Re to consumers in current member countries and expanding the company to other countries in regions prone to natural disasters, such as Bosnia and Herzegovina, Romania and Kazakhstan. The individual natural disaster risk profiles of the countries that are part of this proposed project are summarized below based on studies carried out in recent years.

Albania is vulnerable to floods, earthquakes, landslides, drought, extreme temperatures, windstorms, and heavy snowfalls, including avalanches. According to the Emergency Events Database (EM-DAT), during the period 1974-2016, floods accounted for the major share of disaster events. Occurrence of different perils over these years shows that the large majority of them are of hydro-meteorological origin. Incidence of catastrophic events in Albania indicates a steady increase in number and economic losses brought by disasters. The September 2002 flood alone affected 16,971 families, inundated 30,000 ha agricultural land, and damaged 494 houses with reported losses of US$17.5 million. The 1989–1991 droughts affected almost the entire nation, i.e. 3.2 million people.

While on November 2019, Albania was struck by a devastating EQ of M6.4, the strongest to hit the country in more than 40 years, and the world's deadliest earthquake in 2019. A total of 51 people were killed in the earthquake, with about 3,000 injured and the level of reported losses were round €1.07 billion.
The Republic of North Macedonia

The Republic of N. Macedonia is vulnerable to floods and earthquakes. In regards to flooding, the country’s geography tends to concentrate and discharge surface water rapidly, resulting in flash flooding. The capital, Skopje, is exposed to flood waves from three rivers: Vardar, Treska, and Lepenec, mostly due to heavy rainfall and snow melting. Data shows a steadily increasing trend of natural disaster incidence over the last decades, in particular in terms of flood severity and intensity. North Macedonia has estimated about US$400 million in losses in the last three decades from floods and earthquakes alone. In addition, due to climate change, the country periodically suffers from droughts, hail and frost affecting the most vulnerable agriculture areas.

For Instance, in early August 2016, torrential rains caused flash floods in the Republic of North Macedonia, severely affecting the populated areas and agricultural regions in Skopje and Tetovo. This led to loss of human lives and great material damage such as destroyed ring-roads, streets, demolished vehicles and infrastructure, including water channels. The most affected areas are located in the northern part of Skopje, where more than 70 per cent of the houses have been flooded.

The key hazards posing risk to the population and property in Serbia are floods, earthquakes and landslides. The valleys of larger watercourses, in which the largest settlements and the best farmland, infrastructure, and industry are located, are highly prone to floods. The floods occur mostly along the river courses of Sava, Drina, Velika Morava, Juzna Morava and Zapadna Morava. Human activity has accelerated soil erosion, increasing the landslide risk.
In May 2014, the country was hit by series of floods affecting 39 out of 120 municipalities, forcing more than 30,000 people from their homes and damaging or destroying roads, railways, bridges, homes, power plants and telecommunications infrastructure. The floods came after heavy rainfall and a powerful cyclone that swept through the central part of the Balkan Peninsula. Obrenovac, a small-town south of Belgrade, suffered the most from the floods.
A damage assessment report adopted by the government in July 2014 put the total cost of repairing the damage at about 1.5 billion euros. This included the damage to homes, infrastructure, agriculture and educational and other facilities. 485 houses were completely destroyed by the deluge and 12,000 hectares of land became unusable for agricultural production in the following season.

Kazakhstan is vulnerable to natural hazards including floods, mudflows, landslides, steppe winds and earthquakes. Climate change is expected to exacerbate hydro-meteorological disasters, adversely affecting homeowners, small and medium business (SMEs), and farmers. With a total area of agricultural land of 222.6 million hectares, agriculture plays a prominent role in the national economy and makes the country highly vulnerable to the risk of climate change. In 2012, for instance, the country experienced a 54 percent fall in wheat production due to an unprecedented drought.

Romania faces severe threats from earthquakes, floods and landslides whose devastating consequences include human and economic loss. In the last hundred years, 14 earthquakes of magnitude VII or greater and eight major floods affected almost two million people. Property loss from earthquakes and floods is estimated at around US$ 400 million per year. Europa Re is committed to contribute so that the effects of a disaster be minimized both at population-level and at the level of the entire economy.

Bosnia and Herzegovina (BiH) lies within the Mediterranean-Trans-Asian fault zone, one of the most active seismic areas of the Balkan Peninsula. The steeply sloping terrain also has a propensity to generate flooding, a risk exacerbated by the growing number of settlements, industrial facilities, and critical infrastructure located in high-hazard river valleys, plains, and large karst valleys. About 2,500 square kilometers (60 percent of all plains and lowlands) is considered to be at high risk of floods. In the past, there were enough flood mitigation structures to protect about 50 percent of the flood-prone areas, but many of them were destroyed during the devastating war in the 1990s. In addition, the country is also frequently affected by such hazards as landslide, forest fire, hail, windstorm with lightning, drought, early and late frost, and heavy snowstorm.